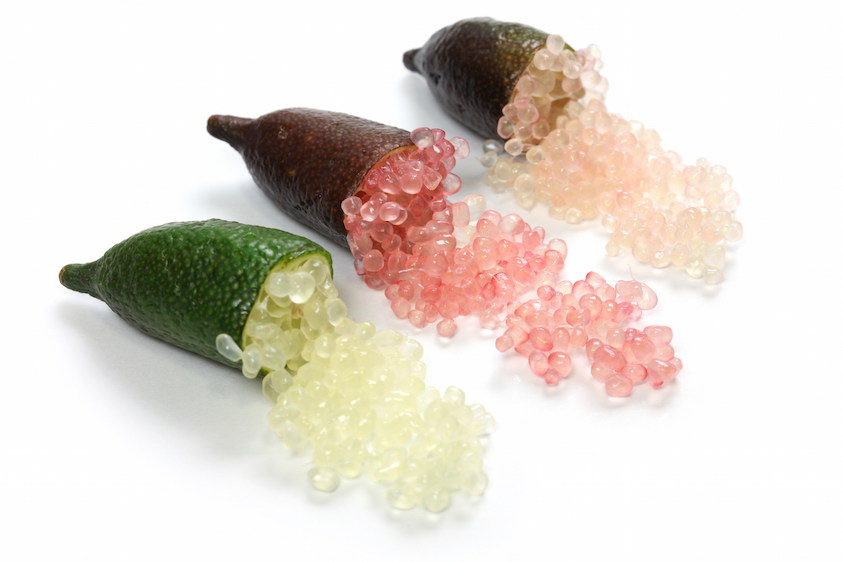 Australian finger limes are a species of citrus fruit that are native to rainforests of the central eastern coast of Australia. They are long and cylinder-like in nature, reaching 3 to 12 centimetres (1.2 to 4.7 inches) in length and they generally have a diameter of 1 to 3 centimetres (0.4 to 1.2 inches). The beautiful range of skin colour of the finger limes can be yellow, pink, red, purple, or green. Australian finger limes were traditionally a form of bush tucker, and have become more popular in recent times for culinary use – on the rise since the late 1900s, especially in the restaurant industry. Aussie finger limes resembles caviar, the fruit consists of hundreds of tiny, tangy juice vesicles, and is a translucent red, green, pink or yellow colour. They have quite flavourful juices, particularly tangy, especially when the pulp itself is chewed. 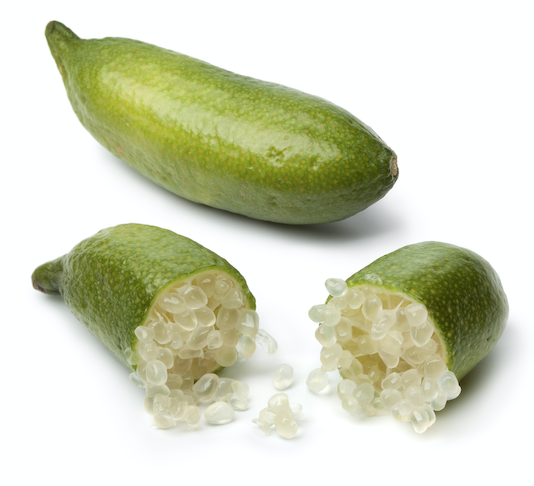 Because of small scale production, finger limes are very difficult to find in the market place. They get distributed to large metropolitan areas and are mainly available at white table cloth restaurants and at some high-end retail stores. Mixologists use them in drinks and chefs work with finger limes as a garnish, primarily in seafood recipes and Asian Fusion dishes. Australian government data estimate the total national production of finger limes at around 10 tons, with about half of the fruit exported to Europe and Asia

Finger lime is very delicate and susceptible to skin damage, with close to 50% of the harvest ending up as second grade or processed fruit due to injury caused by its own thorns during harvesting. Apart from prospects of high returns, other attractive features of the crop include the fact that is reported to be highly resistant to Phytophthora citrophthora root disease. 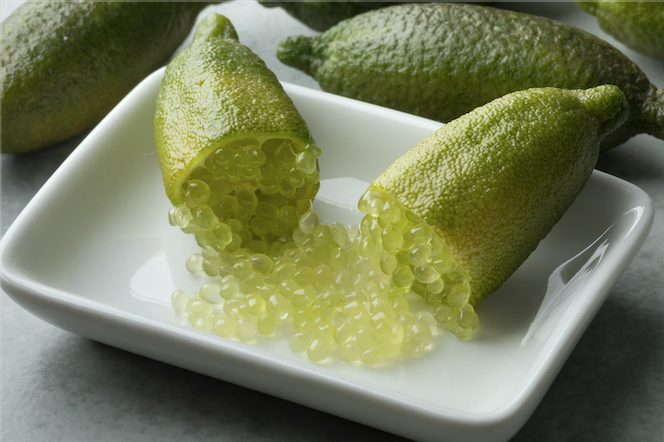 When harvesting, size does not seem to indicate ripeness as the finger limes fruit vary from 4cm to 8cm long and are between 1cm to 2cm thick.

The Australian finger lime (Microcitrus australasica) is native to the rainforests located in the coastal border regions of Queensland and New South Wales (NSW) in Australia (Hardy et al. 2010; Australian National Herbarium 2013). Finger lime is classified as a citrus fruit. The cylindrical fruit, which comes in varied colors such as pink and green, grows to about three inches in length (comparable to a gherkin in size and shape and resembles the index finger, hence its name). The fruit consists of hundreds of tiny, tangy juice vesicles, which some refer to as citrus caviar due to their shape, desirability, and high price (Figure 1). Like other types of citrus fruit, finger limes have nutritional value, few calories, and a high vitamin content (MyFitnessPal.com 2017). Demand for finger lime in Australia has grown steadily since 2010, mainly because of its unique caviar-like pulp, attractive color range, and bushfood status (i.e., a food native to Australia and used as sustenance by Aboriginal Australians).