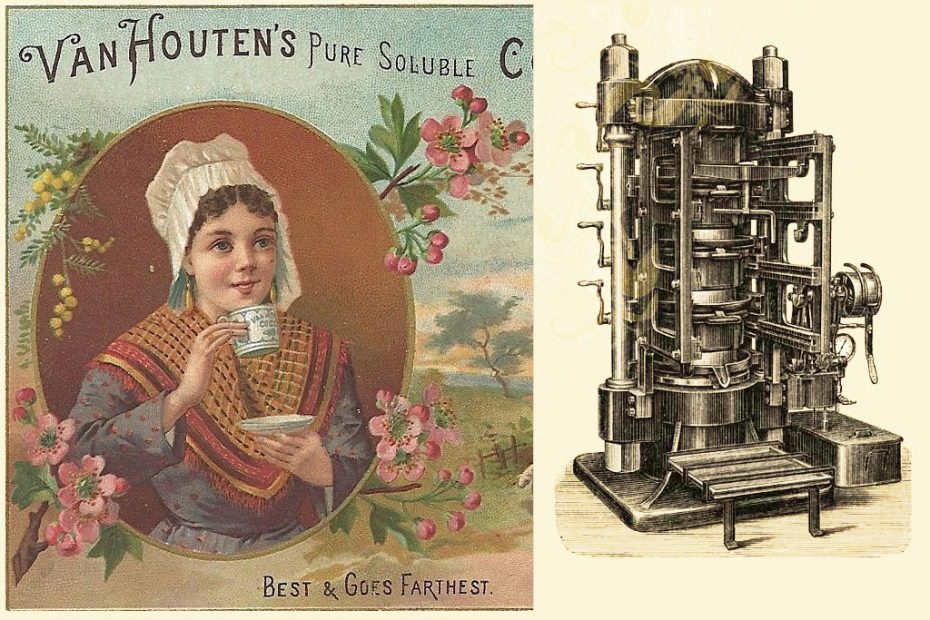 Coenraad Johannes van Houten (1801–1887) was a Dutch chemist and chocolate maker known for the treatment of cocoa mass to remove the bitter taste and make cocoa solids more water-soluble; the resulting product is still called to this day, “Dutch process” chocolate.

In 1828, the Van Houten family of absolute legends invented the cacao press. Its importance to the chocolate world cannot be overstated, because this method for pressing the fat (cocoa butter) from roasted cocoa beans effectively squeezed all of the fatty cacao butter out of the cacao seeds. What it left behind was a marvellous ‘dry cake’ that was then crushed into cocoa powder to be mixed with other ingredients and liquids to make the solidified, edible chocolate you and your mother enjoy to this very day.

Van Houten Cocoa Powder is 100% pure cocoa powder from a company with over 180 years of European chocolate making experience. It is made of soluble cocoa powder with no less than 20% cocoa butter that gives it a delightful chocolate taste and pleasant cocoa aroma. Van Houten Cocoa Powder is suitable for baking and for making delicious cocoa drinks.

A New Level of Chocolate

It all starts with the cocoa beans, which grow on the cocoa trees in tropical jungles from Brazil, to Indonesia, to the Ivory Coast and Ghana and are harvested by hand. The beans, which are the seeds of the cocoa tree fruit, are removed from their pods and placed in large piles to ferment for about a week. During this time the shells harden, the beans darken, and the rich cocoa flavour develops.

Cocoa beans from different countries each have a distinct flavour. Every chocolate maker uses his or her own special blend to create their unique recipe.

Cocoa beans are roasted in large, revolving roasters at very high temperatures. A special hulling machine then takes the dry, roasted cocoa beans and separates the shell from the inside of the bean – called the “nib.” This is the part of the bean actually used to make chocolate. The nibs then are ready for milling, a grinding process which turns the nibs into smooth liquid called chocolate liquor – which, by the way, contains no alcohol.

The main ingredients in chocolate are the chocolate liquor, cocoa butter, sugar and milk which are blended together into a mixture. The mixture is dried into a coarse, brown powder called chocolate crumb, which is then further ground and refined until it becomes a thick liquid called chocolate paste.

The paste is poured into huge vats called conches, where the gritty particles are smoothed out from the crumb. This process can take anywhere from 24 to 72 hours. Finally the paste is tempered or cooled in a controlled manner to the right texture and consistency, and other ingredients, like almonds or peanuts, can be mixed into the paste.

The late 1800’s and early 1900’s generated a chocolate boom that is still being felt today, led by other über rich family companies such as Cadbury, Hershey and Mars.   Currently 40-50 million people depend on cacao farming for their livelihood, producing 3.8 million tons of cacao each year.

Among the chocolate brands available today, few can claim a legacy that goes back over 180 years. Van Houten has been manufacturing cocoa powder since 1828, when its founder, Coenraad Van Houten, pioneered a process to manufacture cocoa in Amsterdam, Holland. The result was a tastier and more soluble cocoa powder which spurred the growth of the hot chocolate drink industry.  Cocoa mass was treated with alkaline salts to remove the bitter taste and make cocoa solids more water-soluble; the resulting product is called “Dutch process” chocolate. Today the process is known as “Dutching”. The final product, Dutch chocolate, has a dark color and a mild taste.  The discovery, also paved the way for the subsequent manufacture of the chocolate bar. This eventually made volume production of chocolates possible and also made chocolates affordable, a fact that Chocolate lovers today are blissfully unaware of – as they can indulge in chocolates so easily whenever they like.

Have you tried the world’s best hot cocoa?