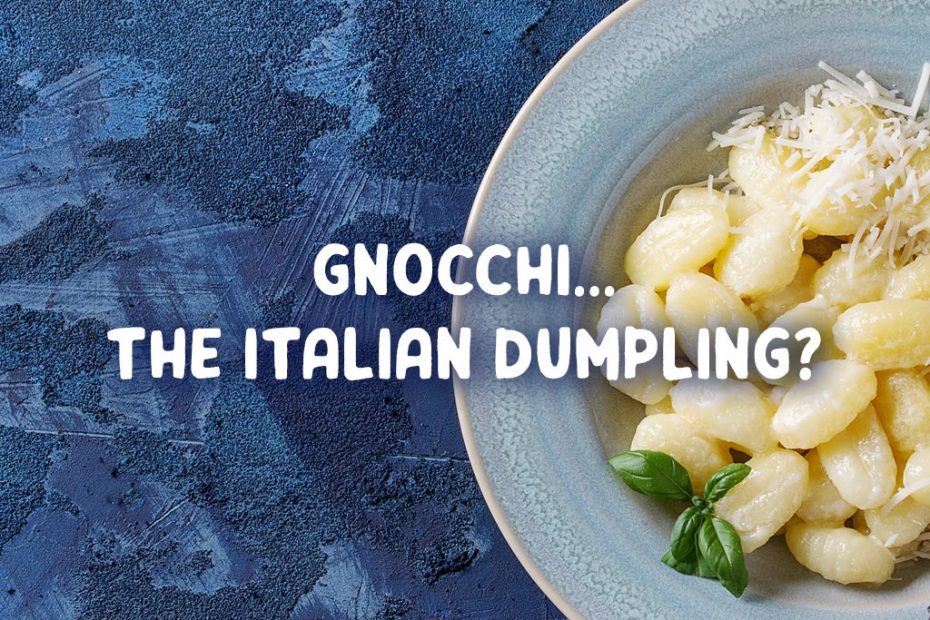 Make no mistake, gnocchi is no newcomer to the food scene.  It’s a food that is said to have been present 9,000 years before the birth of Christ. So, what  exactly is gnocchi? They are small Italian “pillows” traditionally made from flour and cooked potato, rolled and cut into bite-size pieces before being quickly cooked in boiling water to reveal light and fluffy little dumplings.

There are many regions that lay claim to the origins of gnocchi, but they are most commonly associated with northern Italy, these “Italian dumplings” are found all over world in many diverse forms, made with a variety of base ingredients depending on where they come from: flour, corn meal, semolina, bread, chestnut flour, ricotta, or vegetables—from pumpkin to spinach to the classic potato.

What’s in a Word?

The word gnocchi is thought to come from nocca, which means knuckles, or from the Lombard word knohha, which means knot (such as wood knot) or walnut—all words that imply the small, tight, rounded shape of gnocchi that we know today. The term gnocco, however, means “node” and refers more to something hard, just like the “knuckles” of the fingers.

In his 1570 cookbook, Bartolomeo Scappi has a recipe for “gnocchi” made from a dough of flour and breadcrumbs mixed with water and pushed through the holes of a cheese grater. A little later, egg, flour, and water were introduced to the recipe, which became known as malfatti. The word means “badly made” and is still the name that Tuscans apply to their spinach and ricotta dumplings, gnudi.

People are probably the most familiar with potato gnocchi, making it more “traditional” version. However, there are several regional variations of gnocchi, depending on where you are or who you ask in Italy, for example; Gnocchi alla Romana, a Roman-style dish made with semolina wheat flour. It’s first cooked on the stovetop, then rolled flat, cut into disks, layered into a baking dish and finished in the oven.

There is also ricotta gnocchi and Sardinian gnocchi—the latter, also known as malloreddus, is made with durum wheat semolina and a pinch of saffron, leading to a denser, more toothsome pasta.

Today there are many variations for the gnocchi dough, such as cornmeal, wheat flour, semolina flour, and often other ingredients such as pumpkin or spinach are also combined. The classic potato gnocchi are a dish present in the gastronomic traditions from every region of Italy.

In Venice, gnocchi is also known as macaroni. Made from a base of flour, milk, and eggs cooked and shaped into little discs, they then are baked in the oven with butter and cheese. It’s an almost identical preparation to Lazio’s famous gnocchi alla romana: round, flat discs of cooked and cooled semolina. Still further south, on the coast of Sorrento, a Sunday lunch typically includes potato gnocchi baked in the oven with a bright tomato sauce, fresh mozzarella and basil.

For many choosing choosing a real authentic Italian Gnocchi variety can be a daunting task… Let ACIT help you discover a new world of incredible flavours, in The Little Shop.