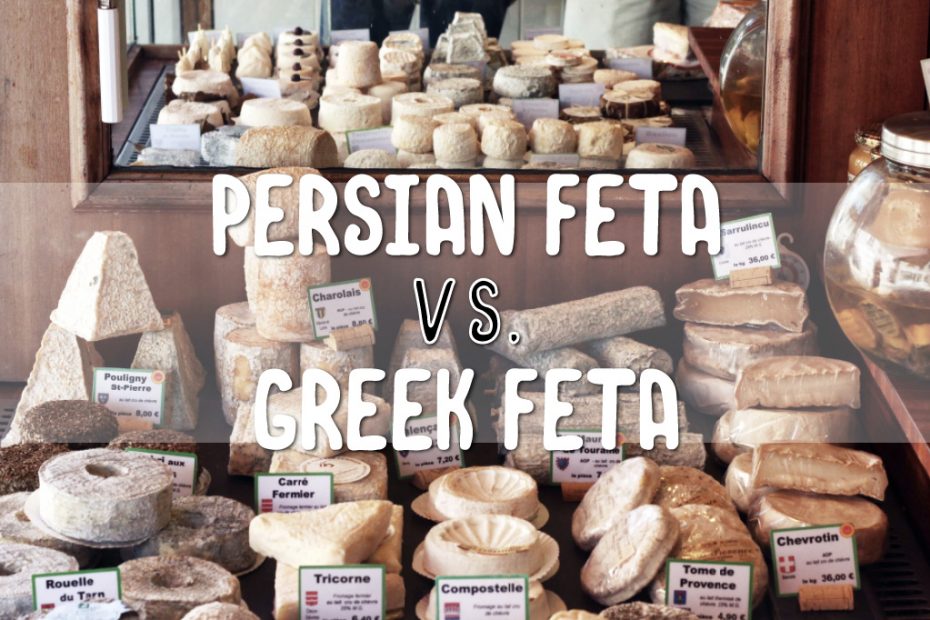 Not All Feta Is Created Equal — Here’s What You Need to Know. When a recipe calls for feta cheese, we know you’ve got a lot of options, today we look at two of our favourites. What this means is you may decide to shop more carefully to get the perfect cheese for your dish.

Greek is the feta cheese that you see most frequently. The characteristics is this staple of feta is a briny, tangy, and sharp, and the fine texture makes it perfect to crumble in salads, sprinkle on cold soups, or toss into some rigatoni with sausage, beans, and greens. Although it isn’t the saltiest, Greek feta packs the most intense flavour. Persian feta gains its popularity due to soft, creamy lush buttery taste!

Traditionally, feta has been produced in some capacity since the twelfth century, and was eventually named after the Italian word fetta meaning “slice”. The white, salty cheese comes packed in a milky brine, which is essential to keeping it fresh and delicious. The European Union only recognises Greek feta as the real deal, but many other countries have tried their hand at making the crumbly goodness.

Feta is a staple to the Greek diet, so it’s no surprise that Greeks eat more cheese per capita than any other European country. In the northern part of Greece, feta is simply called “cheese”, because most of the country’s feta is produced in that region. This cheese has a strong personality and bite, with a richer taste that develops over time.

The flavor is salty, tangy, and lemony. Most Greek feta varieties have at least 70 percent sheep’s milk, and the remainder tends to be goat milk. The more goat milk in the cheese, the more crumbly the feta becomes.

It is wonderfully soft and creamy with a lush buttery finish cheese with a salty tang that is made from cow’s milk, marinated in garlic, bay leaves, peppercorns, fresh thyme and olive oil. It is suitable for rockets, chickpeas, roast root vegetables or crumbled over tarts, stuffed in ravioli. It is said to be great accompaniment for sparkling wines, pear or apple cider and Rose.

— 1 ounce of feta has about 76 calories and is higher in fat than cow’s milk cheese at about 6.5 grams and saturated fat makes up roughly 4 grams.

— There are 5 grams of protein in 1 ounce of this beloved cheese and 258 milligrams of sodium.

— You can soak feta in water a few minutes prior to serving to decrease salt content.

At the end of the day, though, the most important thing to look for when buying feta is how it’s packaged. You should always buy feta in brine. By “feta in brine,” we mean the stuff that comes packed in a plastic container full of liquid—in this case, salt water—as opposed to the pre-crumbled or vacuum-sealed varieties. Not only does the brine intensify flavour, elongate feta’s life span, and improve its creamy texture, but it’s useful as a secondary ingredient. You can use that brine to marinate chicken, thin out whipped feta dips, build flavor in broths and braising liquids, and cook grains and beans.