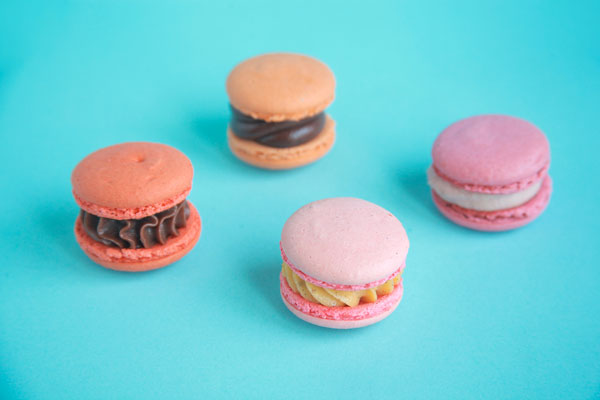 It has been said, that macarons are perhaps the most famous and treasured French desserts. A meringue-based sweet comes in many tastes and delightful colors, often pastels, from classic salted caramel to lavender and honey. Every year, foodies flock in droves to renowned macaron purveyors Ladurée and Pierre Hermé, yet the humble macaron was not always so glamorous.

Origins of the Macaroon (not Macarons)

First things first, macarons are not to be confused with macaroons! Macaroons are small, so small they once were claimed to be tiny cakes. That being said, a macaroon is a small cake or is it a cookie, typically made from ground almonds, coconut or other nuts, with sugar and sometimes flavorings, food coloring, glacé cherries, jam or a chocolate coating – or a combination of these or other ingredients. Some recipes call for sweetened condensed milk.

Macaroons are sometimes baked on edible rice paper placed on a baking tray. The first known appearance of the macaron in Europe was all the way back in the Middle Ages. At the time, the macaron was a small sweet made of almonds, egg white and sugar, and was crunchy on the outside and soft on the inside. Even though the French take credit for the macaron, Catherine de’ Medici likely brought the maccherone to France in the 16th century from Italy, where it had been produced in Venetian monasteries since the 8th century. Back then, they were rather humbly called ‘priest’s bellybuttons,’ due to the pastry’s shape.

Nevertheless, France’s role in the macaron’s history is not to be underestimated, as that’s where the confection became massively popular. The first written recipe of the macaron appeared in France in the 17th century, with a number of different recipes emerging since. What’s more is that the macaron is very difficult to make, as it can easily become deformed and its crust often breaks during baking.

The macaron has a special day of the year – March the 20th. It was introduced in 2005 by Pierre Hermé, another famous French confectionary house. ‘Macaron Day’ is celebrated throughout the world.