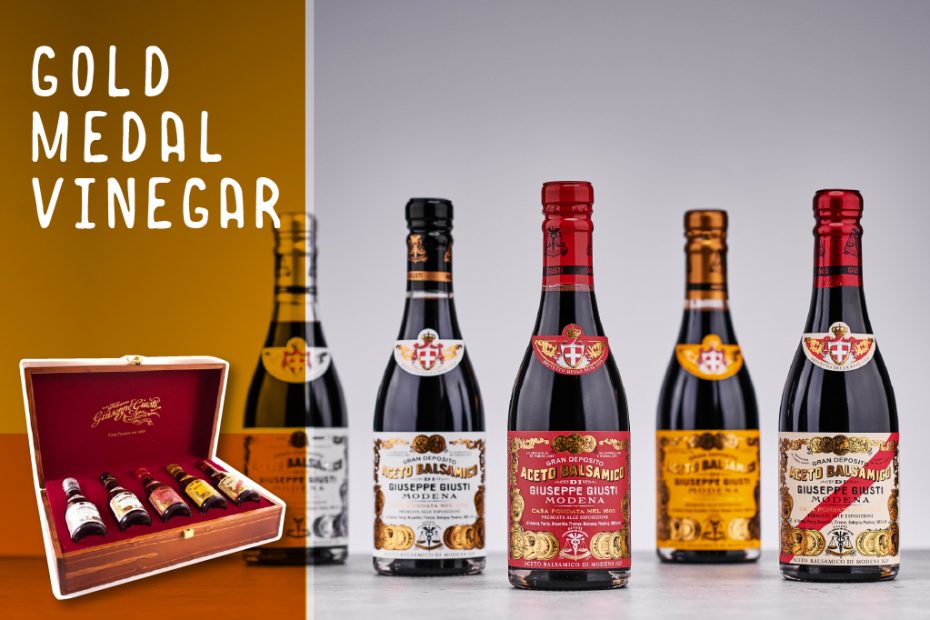 Since the seventeenth century, the Giusti family are said to have been producing Balsamic Vinegar, passing down a recipe that created a complex harmony of flavours and a product of excellence, appreciated all over the world. A constantly evolving centuries-old knowledge , a devout research of excellence – based on flexibility, sustainability and enhancement of the territory. Acetaia Giusti are considered an international reference for top quality gastronomic “Made in Italy”.

Between the nineteenth and twentieth centuries, Giusti Balsamic Vinegars becomes recognised throughout the world and enjoys unanimous success among the European public. Presented at the various International Exhibitions of the Belle Epoque, thanks to the initiative of Giuseppe and after him Pietro Giusti, the most important of the Giusti Balsamic vinegars, of 30, 50 and even 100 years, win numerous prestigious accolades, including 14 gold medals. 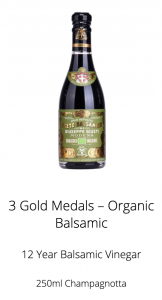 The Balsamic Vinegar recipe has always been part of Modenese family heritage, handed down orally from generation to generation for centuries, its precious casks intimately preserved high in attics. It has been more than 400 years since the ancestors of the Giusti Family set the first collection of casks in the attic of their house in Modena. Since then, each of the 17th generations passed on to the next one the knowledge, sensibility, and passion essential for the production of an excellent Balsamic Vinegar.

“An ancient history that still today lives on, handed down from generation to generation.”

In 1863, during the Modena Agrarian Exhibition, Giuseppe Giusti established and put into writing what are still considered the golden rules for obtaining the “perfect balsamic vinegar of Modena”: the selection of grapes, the quality of the casks, and – of course – the time . This passage represented a turning point in the history of the product: the balsamic vinegar of Modena was no longer a family secret; it became a well-known ambassador of the Modena culinary tradition. 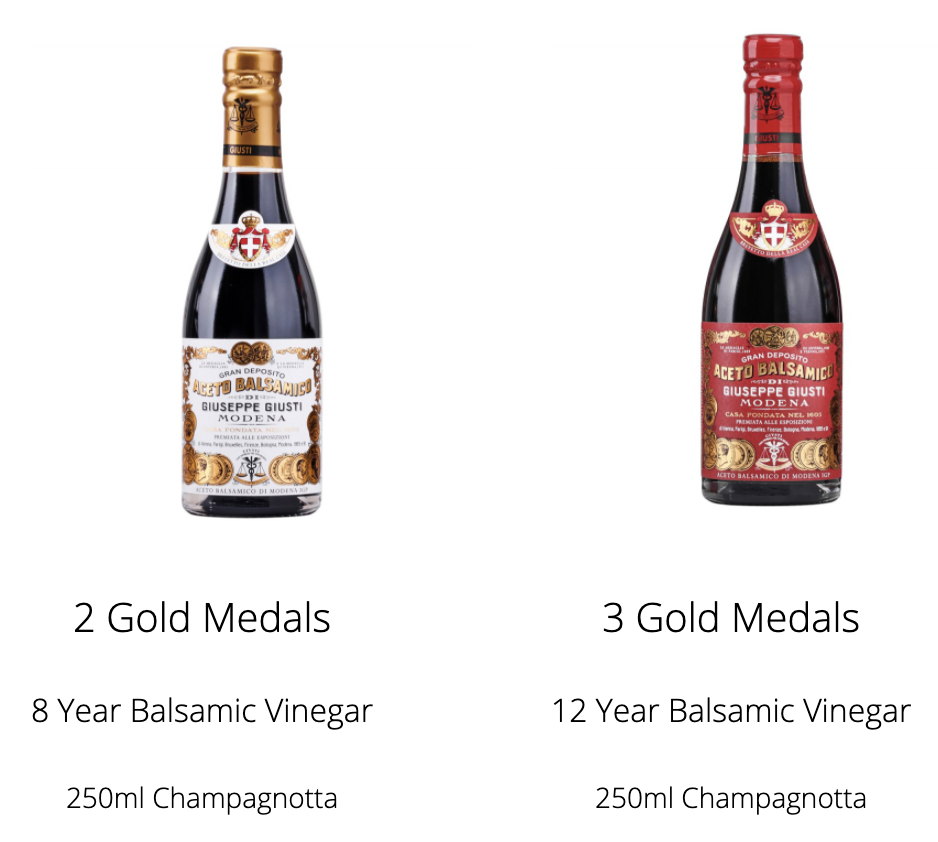 During the Belle Époque Acetaia Giusti asserted its value throughout Europe, thanks to the World Expos, where the Giusti balsamic vinegar of Modena was awarded with 14 gold medals – still depicted on the products’ labels – and in 1929 it became the official supplier of the Royal House of Savoy, by choice of King Vittorio Emanuele III.

How Gold Medal Balsamic is Made

Creating an exceptional balsamic vinegar depends on the competence, experience and attention to detail and the lengthy period of ageing. Proud of a know-how which has been refined over its 400 years of family history, Giusti combines both its respect for tradition with a sense of local corporate responsibility and a modern and sustainable production philosophy. The classic and seasoned glazes, transform Balsamic Vinegar of Modena into a reduction. Flavours range from the delicacy of fresh fruits to the unmistakable aromas of truffle and porcini mushrooms. 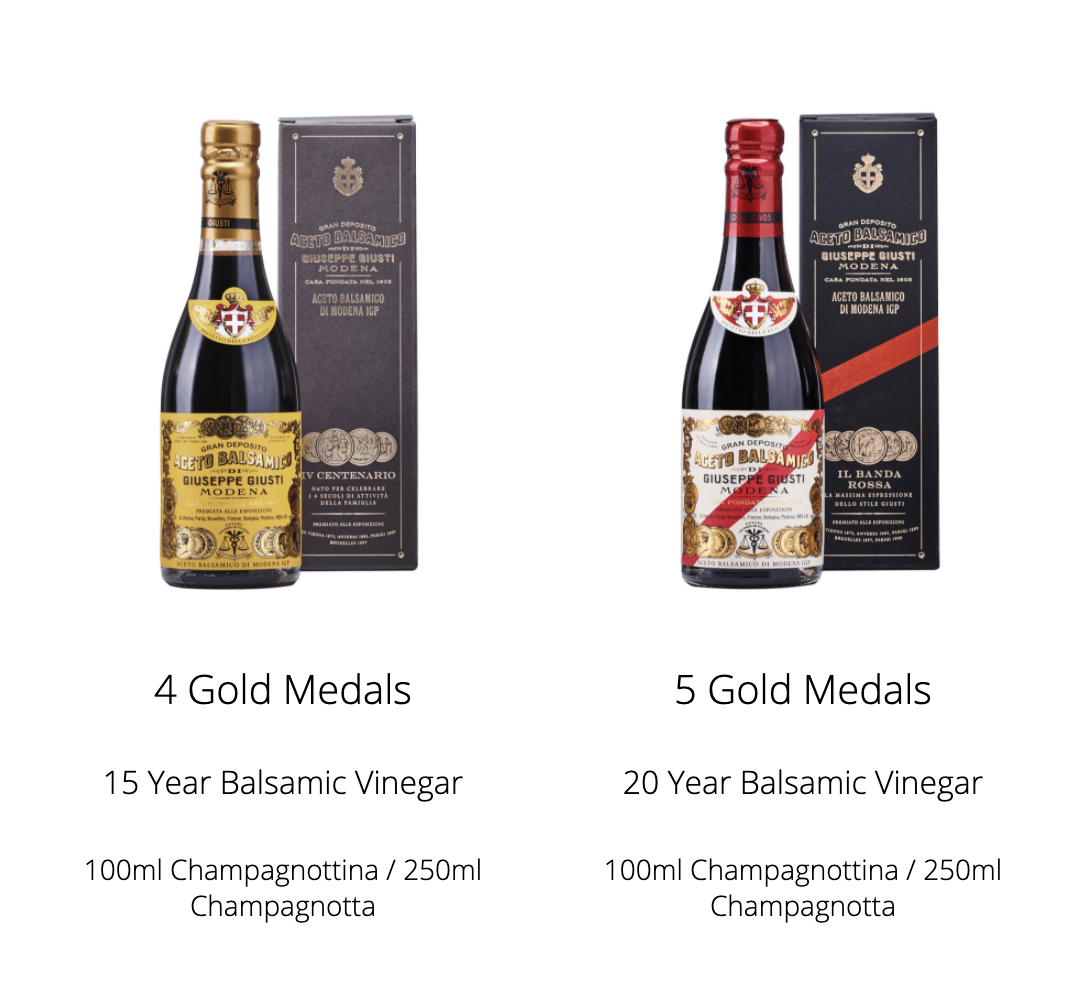 A profound history In Italy, Balsamic Vinegar of Modena has always been synonymous with culture and history. The first evidence of its production dates back to Roman times. It was during the Renaissance though that it conquered a place of honour at the table of European aristocracy, becoming known as the “ Black Gold of Modena ”, the elixir of kings and princes.

Founded in 1605 in Modena, the “Gran Deposito Aceto Balsamico Giuseppe Giusti” is the oldest balsamic vinegar producer in the world. Today the historic a cetaia is run with passion and innovative enthusiasm by the 17th generation of the family: Claudio Stefani Giusti proudly continues a business born over 400 years ago. For more from this remarkable Italian company, click here aged balsamic vinegar.