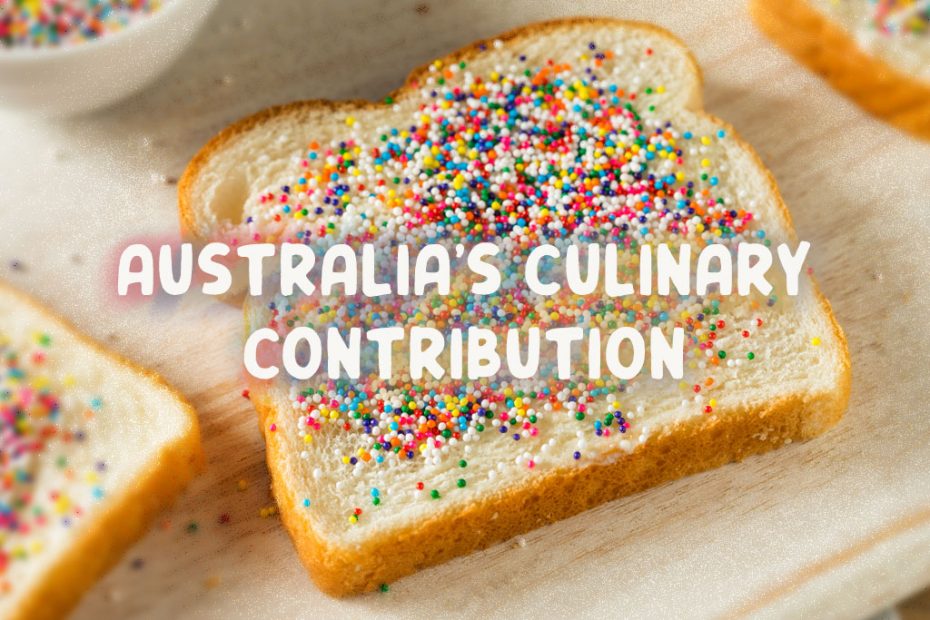 It has been called Australia’s answer to Willy Wonka’s chocolate – sliced bread, typically cut into four triangles, buttered and sprinkled with frosty sprinkles. The Australian term for sprinkles is also called “100’s and 1000’s” (pronounced hundreds and thousands). The bread is commonly served at children’s parties and every single bakery in Australia and New Zealand. The origin of the term “fairy bread” is shrouded in mystery, which is why today, we lay out all the prevailing theories of this culinary marvel.

The Origin of the Term

Part of the Fairy Bread enigma is that no one really knows where it came from. Its closest relative is hagelslag, a chocolate sprinkle sandwich topping from the Netherlands—and yet even the Dutch stop at rainbow food colouring.

One of the earliest references to Fairy Bread in Australia comes from an article published in a 1934 issue of the Sydney Morning Herald. “Christmas Dinner with Toddlers” advises parents to give their children “a slice of fairy bread with sponge cake and the usual drink of milk” as a festive treat, but most Australians’ memories of Fairy Bread are tied to a different childhood event.

The fairy bread was alleged to have first been written about on the pages of the Mercury newspaper on Anzac Day 1929. The newspaper mentioned it in a report of the menu for a children’s party for ill children who were patients at the Consumptive Sanatorium at New Town, Hobart… yet still, the name appears to go much further back.

Robert Louis Stevenson’s 1885 book ‘A Child’s Garden of Verses’ includes a poem of the name “Fairy Bread”, but the culinary Frankenstein who decided to turn an innocuous kids’ verse into a real life snack is unknown.

Inside a Sprinkle Factory

With its core ingredient there is no smell – ‘hundreds and thousands’ are not cooked, so the sugar is never caramelised – but when you open your mouth, the sweet dust settles on your taste buds. In the main factory where the sprinkles are made, the ceilings are high and there is a lot of natural light, the workers wear white, the machinery is white, the walls are white. And then there is the air inside the factory — very, very dry.

Says one of the operators, “We have a saying in our business – dryness is our best friend. If you can keep moisture at bay, you won’t have a problem with mould. Moulds will be present, but they won’t grow without moisture.” Two rows of machines that look like a cross between concrete mixers and vintage bonnet hair dryers emit a constant, dull roar. Technically, these machines are called “pans”. They churn, round and round and round. Workers add a little water and, as the sugar particles spin, they bind and grow.

The optimal sprinkle size is 1.5mm – any bigger and they’re too crunchy. A regular blend contains seven colours (including white). All nonpareils start out white. It takes about 20 minutes of churning to colour one batch, another 10-12 hours to dry them out properly. Every batch goes through a sieve and a metal detector. The biggest industry trend? Natural colourings: Pinks from beetroot, blues from gardenia flowers and spirulina, orange from paprika, yellow from turmeric and carbon black from burned vegetables. “Know your E numbers,” says the notice on the factory smoko wall.

For those who would say this is a match made in minimal-effort heaven, we say, how dare you… This pure science, in all it’s glory. To even think about setting up an operation like this, would cost 1-2 million dollars, and it is perhaps this reason there appears to be few competitors in thew sugar sprinkles industry.

As so-called trash publication ‘VICE News’ had the audacity to remark: “It’s nothing more than triangles of white bread covered with butter and topped sprinkles, but it’s simple, nostalgic, and a minimal-effort substitute for real cake.” Yes VICE, we do need to talk. We hope this small glimpse into Australia’s culinary icon, The Fairy Bread, will garner the respect it commands.

So dear readers, we ask, why go to the effort of baking children a real birthday cake when you can simply butter up a plate of sliced triangles and topped with multi-coloured rainbow sugar pellets! We look forward to your thoughts below…