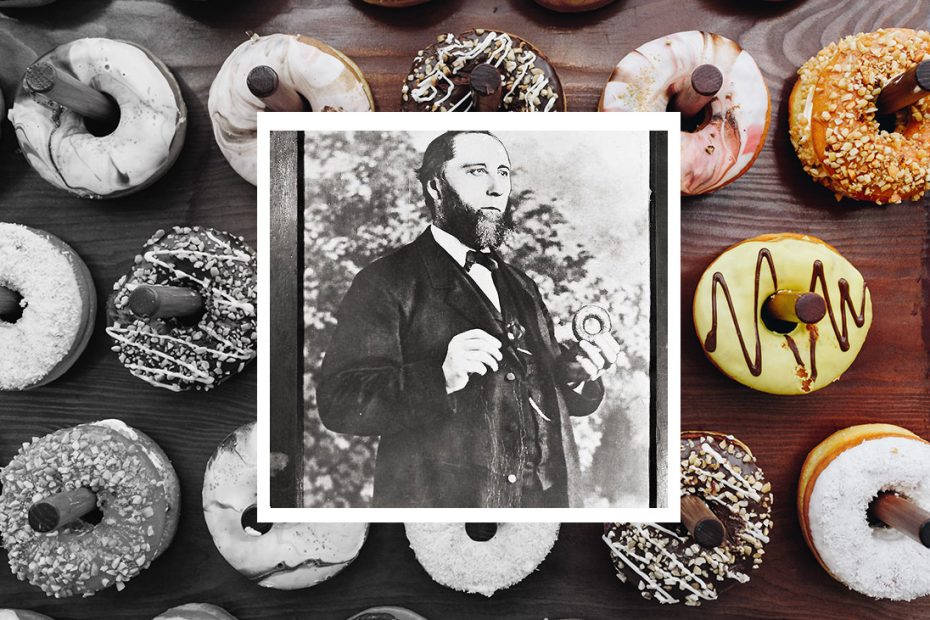 Who Invented the Modern Donut?

Over the years, donuts have become a distinctly “Western” food passion. This passion spread all of North America, up into the far reaches of Canada. It didn’t stop there, go to any petrol station in Australia, you will find a plethora of those tasteful bastards. An obvious question emerges with any obsession, just where exactly did they come from? As with so many world-changing discoveries, the truth behind the invention of the doughnut hole has been obscured by the top heavy uneven frosting of history.

A Food War Rages On

Today a food war is being raged amongst nations for the bragging rights of the invention of the Doughnut. It’s history goes back centuries, long before the discovery of the New World. In ancient Rome and Greece, it is said that cooks would fry strips of pastry dough and coat them with honey. In Medieval times, crafty Arab cooks started frying up small portions of unsweetened yeast dough, drenching the plain fried blobs in sugary syrup to sweeten them.

Those who celebrate Hanukkah say that the doughnut also has a rich history in Jewish cuisine, where the deep-fried dough balls are known as sufganiyot or bimuelos. They are also called deep-fried cakes, with a long European history and roots in still earlier Middle Eastern cuisine. They were said to be introduced to America by the Dutch in New Netherlands to America as oliekoecken (oil cakes or fried cakes). In his book Glazed America, author Paul Mullins says that the first printed recipe for doughnuts can be found in an English cookbook dating back to 1803, included as part of an appendix of American recipes.

As you can see, the battle lines are being drawn… is precise ‘historical carbon dating’ needed to win this war? Or is there yet another way? To answer this question we must return to the holes. Eventually holes were added to the center of the fritter to create the shape of doughnut we’re familiar with today. This invention came out of necessity.

At a certain point, egg yolks were added to the dough – it was discovered that this produced a richer and firmer end-product. The problem was, the fritters would often end up raw in the center after frying– the exterior would cook before the inner part of the doughnut did. The addition of a hole in the center eliminated that problem. To be frank, a donut is not a donut without a hole, so at this point in our discussion, we must eliminate all countries making claim to creation. Yes, all of you have just been eliminated, save one…

The Invention of The Modern Doughnut

The story goes: 15-year-old Hanson Crockett Gregory, an American sailor, took some of his mother’s pastries with him on a voyage. Captain Gregory’s mother Elizabeth was known for making delicious olykoek, or ‘oily cake’ (a ball of dough deep-fried in oil) that didn’t have a hole in it. The little Dutch cakes were a favourite among 17th century settlers in New Amsterdam, later called New York.

Elizabeth made a batch for her son to take on his voyages and passed on the recipe so the cook on board the lime-trading ship could make some more at sea. Captain Gregory was clutching an olykoek with one hand while steering his ship through a sudden storm on June 22, 1847. As the wild weather hammered down on the sea captain, a powerful wave caused him to quickly grab the steering wheel with both hands, impaling the olykoek on the ship’s steering wheel. The spoke drove a hole right through the centre of the pastry.

Captain Gregory looked down at his snack and found he liked it better with a hole in the middle, and ordered his cook to make them that way for the rest of the voyage. The doughnut hole and thus the modern doughnut was born. On the 100th anniversary of his invention in 1947, a bronze plaque honouring him was installed in his home town, now called Glen Cove.