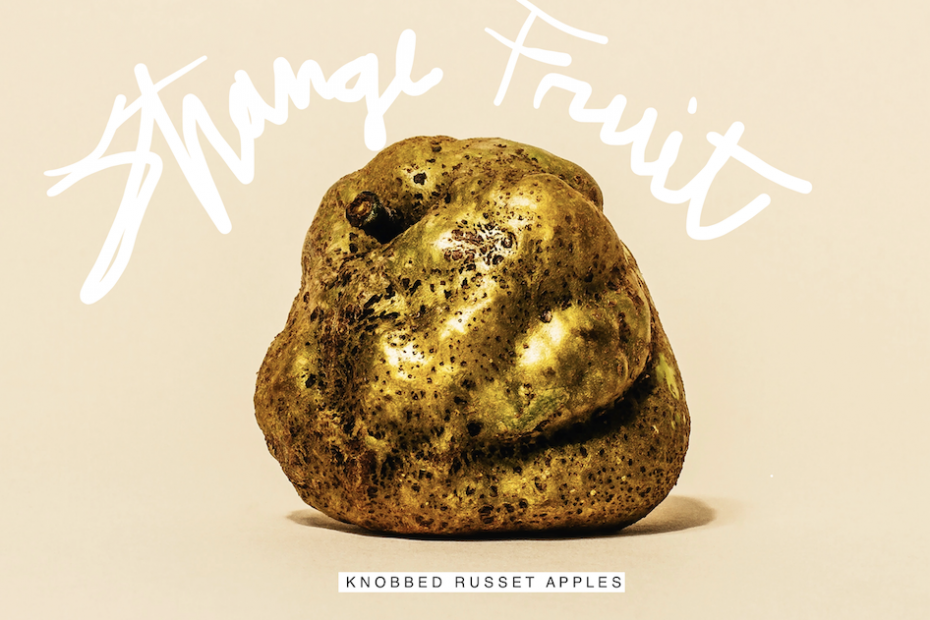 It is claimed that every time an apple tree grows from seed, an entirely new cultivar is born. The fruit from that tree will be the first and only of its kind, never known or tasted before. There are estimated to be 7,000+ named cultivars of apples in the world, Some of these apples look like frogs; some are pink inside; some look psychedelic, and some look like stars. This is the first in our “Strange Fruit” series and we feature a little known apple that sports a rough but edible skin covered with russet and welts, and excellent flavour… It’s called the Knobbed Russet (or Knobby Russet). 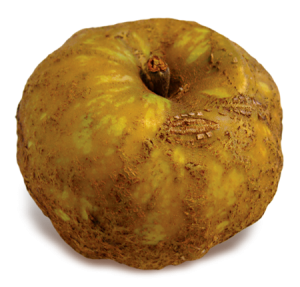 Knobbed Russet was first grown in Sussex, England, in 1819. It has firm and dense golden flesh. Its flavour has been described as strong and earthy, rich and sugary. It is harvested in the UK, in October, and it keeps well in storage. The apple has green and yellow fruit, sometimes scarlet streaked in the sun. Uneven surface is overlaid with rough grey and black russet, welts and knobs; worthy of its name. Crisp, rich, sugary, highly flavoured flesh of the highest quality.

There’s only one way to adequately describe this apple – it’s just plain ugly! Often said to look more like a potato than an apple, Knobbed Russet originated in Sussex, England in 1819. It was preserved after WWII when the National Fruit Trials collections were first assembled in England. Described in Burford’s, Apples – A Catalog of International Varieties, as being green and yellow with occasional scarlet streaks on the sunny side. It’s irregular, uneven surface is overlaid with rough gray and black russet and distinctive welts and knobs. The soft and sweet creamy flesh is fine-grained with a sweet flavour.

Through photographs of rare & curious apples, “Odd Apples” celebrates the enchanting diversity and odd nature of apples, expanding our perception of what they look like and what they taste like. You can view/purchase the book here

Got an odd fruit you think we should add to this series? Let us know in the comments below!