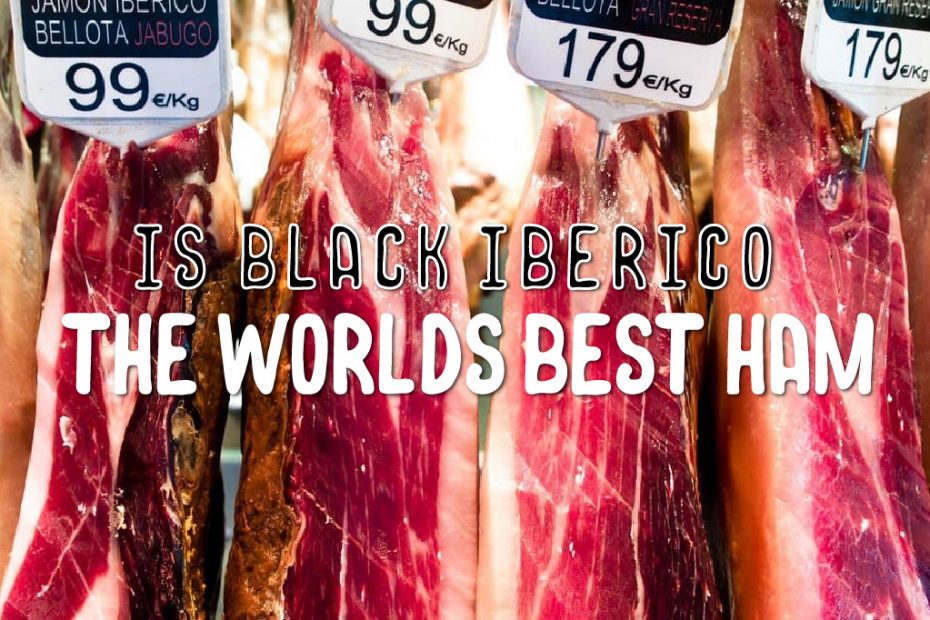 Black Iberian Ham is classed as some of the best ham in the world. And perhaps the word ‘ham’ doesn’t do it justice. Comparative tastings besides pancetta and other highly rated cured pork products still place black Iberian ham as the leading contender. We’ll discuss how this iconic product is made.

Immediately after weaning, the piglets are fattened on barley and maize for several weeks. The pigs are then allowed to roam in pasture and oak groves to feed naturally on grass, herbs, acorns, chestnuts, and roots, until slaughtering time approaches. At that point, the diet may be strictly limited to olives, chestnuts, or acorns for the best-quality jamón ibérico, or maybe a mix of acorns and commercial feed for lesser qualities.

The hams from the slaughtered pigs are salted and left to begin drying for two weeks, after which they are rinsed and left to dry for another four to six weeks. The curing process then takes at least twelve months, although some producers cure their jamones ibéricos for up to 48 months.

Cured meats have been specifically produced to be edible for a long time. The curing process was used for generations to preserve pork before the invention of refrigeration. During the curing process the meat is dried in salt, which helps to prevent the build-up of harmful organisms, and then is hung to be exposed to the elements, producing an exterior layer of mold which helps to protect the meat inside.

Normally, jamón is sold either sliced and vacuum-packed or as a whole leg. Vacuum-packed jamón may last up to 100 days at room temperature because the packaging seals out oxygen and slows the aging process. A whole leg does not last as long. If the jamón is regularly cut and covered with clingfilm or cheesecloth, an opened leg may last for three months.

Freezing is not recommended, since it damages the fibers in jamón and alters flavours.

Meaning literally black leg, pata negra is a commercial label for jamón ibérico. In colloquial Spanish and popular culture, it is used as a superlative or synonym of the best.

It referred to the color of the pigs’ hoof, which are white or fair-colored in most traditional and commercial pork breeds in Spain, but always black in the Black Iberian breed.

The term used to be liberally applied in both Spanish and Portuguese, leading to quality and markets disputes, since the term was used interchangeably both as great quality jamón (of any breed) and ibérico jamón (of any quality). Along reputable pata negra producers, there were plenty of doubtful producers using the term in their labeling.

Jamón has also been sold unlabeled in small towns and unpretentious establishments all around rural Spain. While as a general rule, a black hoof should indicate an Ibérico ham, the ancestry could be exceedingly cross-bred or untraceable, and also there were cases of ham sourced from rare breeds with dark hoofs, and even manually darkened hoofs.

Modern regulations only allow the use of the wording pata negra for black label jamón sourced from acorn-fed pure-bred Black Iberian pork.

If you get a chance to taste Iberian Ham, be sure to give it a try. You won’t be disappointed!

PrevPreviousDifference Between Neapolitan & Margherita Pizza
Next50 Most Popular Winter Recipes of All TimeNext
Tags:black iberico ham